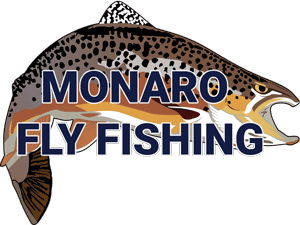 All About The Centuri Knot

We watched as the bow waves raced around the tail of the pool. Obviously a much larger fish than what we had previously seen that day chasing smaller fish out of his territory. It was late in the afternoon and we’d fished fairly successfully through the day. Until then . 4.5 lb fish were to be seen cruising in schools, pre-spawners, as it was late April. The fish were getting territorial when a trophy sized brown came from the tail. John, Steve and I stared in amazement at the fury of the chase and the other fish being herded out into the middle of this rather large pool. “Put a cast out”cried John, he didn’t have to say a thing as Steve and I were stripping line from our reels to get what was a long cast in. Out lay the lines on the surface, the bow waves now racing back towards the tail of the pool. Johns line was passed, Steve’s also, “he’s swimming to fast to be interested in food” I thought. Zing wham, my line was suddenly taunt and racing, the fish had hooked himself!!! I lifted the rod and gave good pressure on the fish having a fair idea of my 4lb tippets limitation. The fish rolled and swerved in one place like a large eel. 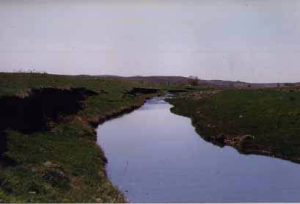 This was a ‘BIG’ fish. Excited as I was and with a good arc in my rod I remember hearing John screaming, “Not too much pressure”. Seconds later the line went slack.My shoulders dropped, I sighed in disbelief as did Steve.  He was gone. 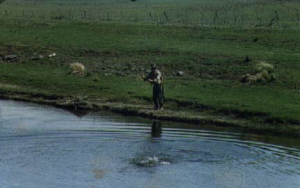 I wound in slowly already knowing that one of two things had happened. The leader came to me, 6lb with a curly tail. The blood knot had departed, probably due more to my hurried tying of this awkward knot, which takes patience and time to tie properly (yeah well it does for me when fish of an average 4 1/2 lb are swimming around in clear view!). 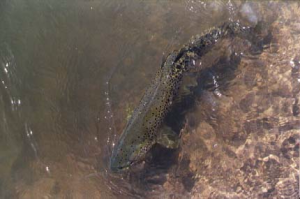 Steve and John were coming over, I hid the telltale strand of mono, “Knot?” asked John, “No” I lied; it wasn’t a promise (although I suspect John was aware of that). 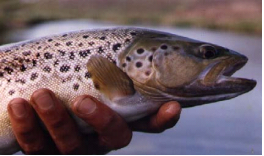 On the long walk back I cursed my hastiness when Steve asked what type of knot I use to join mono. “The blood knot of course,” I answered. It was then Steve opened up on a few secrets of the professionals who’s livelihoods depend on bringing “them” in. He showed me his trump, the Centuri knot.

I find it’s quicker and easier to tie and holds better on tied leaders of different diameter then the standard blood knot. It can also be used for a variety of applications including tying flies to leaders and butt sections to fly line. One knot for several applications makes sense for speed and well tied connections.

At this point and with this thought in mind I’d like to divert your attention to the looped leaders and fly lines which are standard issue now days on new fly lines and tapered leaders. I don’t like them for the slow still water which sustain wild educated fish on the Monaro streams or spooky lake style fishing. I guess this would be standard for any fishery with wild fish that survive by being cautious. The selling point is for Nymph leaders and dry fly leaders is with the belief you would change your complete leader system as to the fishing at hand..

The simplicity of adjusting your leader (usually only needing to lengthen or shorten your tippet) and casting with the intention of driving your nymph close or into the water or delivering your final cast at a point above the water so your dry fly lands gently on the surface as to not become water logged, is a selling point for people who want to instantly catch fish without the knowledge and patience to learn the steps is fly fishing, Spending time on a stream contemplating what and how is a part of the balance of fly fishing.  Seeing nature while you’re sitting still. Fish will cruise again, you regroup and continue on your fly fishing journey..

The amount of disturbance when twitching or lifting your line to recast produces a massive disturbance on the waters surface. Possibility is that would spook fish with the unnatural vibrations produced or the more obvious water movement. The three loops of the single tie nail knot (or the Centuri) is possibly the smallest knot to join the butt section to the fly line.

It is basically a nail knot tied to both joining sections and pulled firmly together for leaders and tippets,.  It’s finer in diameter making for fewer disturbances on the water surface when “twitching” the line to attract attention to your fly. Therefore also catches less slime, and when landing fish, slides through your runners. With no line cutting into the mono the line does not cut itself (which is a problem with some knots creating limitations)

I will add further with a discussion on leaders and what I find works best with the educated Monaro Browns in the streams in another article. For now the basic focus is the Centuri Knot.

The following photos and explanation will hopefully show the basics of the knot. (For right handed fishers),  in joining two lines together.

Pinch the two lines parallel between the index finger and the thumb with the tag end on top leaving around 10 to 25 centimetres or 4 to 6 inches as tag end.

Place your right hand  under and behind the main line pinch the tag end and wrap around the main line from behind crossing over the main line. Pinch between the thumb and index finger to hold in place leaving a loop around 1 centimetre wide.

Again bringing your right hand from underneath and behind the main line form the same loop as above,, pinching again between the index and thumb leaving 2 loops of similar size (the second loop on the back side of the first loop).

Again from behind and under form the third and final loop to form 3 loops being pinched by the thumb and index finger.

You now hold three loops in your left hand with the tag end hanging above. This time from underneath and behind thread the tag end through the 3 loops, pinch the tag and the main line together and at the same time the edge of the first loop formed and pull the lines apart forming a figure 8 with line wrapped around the main line. Wet with saliva and slowly pull the tag ends, making sure the tag end does not slip through and pull the knot firm. Now reverse the line so you can perform the same knot as above to form the exact same knot on the other main line. Once this is done pull the knots hard against each other by pulling both main lines. Grip the tag ends by your teeth and pull against the knot in the same and opposite directions to make sure the knot is snug. Carefully clip the tag ends off close to the knot and test the strength of the knot pulling firmly with consideration of the breaking strain of your tippet.

Tying the butt section of your leader to your fly line is a little more tedious and requires the same basic knot as above with only your butt section being tied to the fly line. You must carefully pinch and push the loops, once firming up, to lay parallel and close to the end of the fly line. Expect the fly line to slip out the loose formed but not firmed knot. You need to be calm and careful but the knot will hold and be as strong as any knot to the leader. Even better I get a small needle and firstly push up through the centre of the fly line creating a small hole. Then with a candle and the needle  eye  pushed into a wine bottle cork I heat the needle in the centre being careful not to overheat (or you will sizzle your fly line plastic requiring a quick snip and start again attitude). Push the needle in if possible around 5 millimetres to a centimetre. Pull the fly line to the side and push the needle through the side of the fly line. Then thread the butt end of the leader up through the hole created and form your knot above on the fly line. This almost stops any chance of the knot catching on the tip of your rod guide.

I find this last style of knot difficult in fly line 4# and under but for anything above it is possible and extremely neat. One tip is when cutting your butt section to slice the line so it has a sharp edge making it easier to push up and through the fly line. This same trick is useful when cutting your tippet with your clippers to thread through the eye of your hook.

I hope this helps with your fly fishing and enjoyment of the sport. Practice the knot with rope first then with line at home repetitively until you’re sure you have it. Replace your tippets after catching large fish, you notice small cuts in the line or the wind knot. Don’t leave it as nothing surer then a large fish will take your fly and snap you off . BAD FEELING. Not a good way to loose possibly the biggest fish you may ever hook!

I’m sure the readers of this classy recollection will find detailed instructions for this knot also on the internet with easy to see graphics.

Give it a go and with a little practice you’ll be tying spinners on in the dark and bringing them to net.